Denmark, officially Kingdom of Denmark is a country in a northern part of Europe, between the Baltic and North Seas. Denmark is not a very big country – it consists on mainland part (Jylland), two big islands (Sjaelland and Fyn) and more then 450 small islands. Population in Denmark is around 5,6 mln. people.

The climate dominating in a country is maritime. That means that during winter time it is quite warm and during summer time – pretty cool. Usually it is windy and rainy weather. Average temperature in January is around 0-1⁰C, July – 15-16⁰C. The sky is often gloomy, gently rain is frequent. Danes are joking, that summer and winter have just one difference – the temperature of the rain. Still, even though a lot of people are thinking that the weather in Denmark is not pampering, during summer temperature could rise up to 20-35°C.

Main language in Denmark is Danish, but around 80 percent of the population speaks English, so if you know English, you probably will not have any problems. People in Denmark likes to communicate, their main values are honesty, business ethics, overall equality and social justice. Denmark is considered to be a least corrupted country in a world.

You can easily say, that the main transport for Danes are bicycles. Almost everybody is using them – there are twice as many bicycles as there are cars. Car is a luxury for a lot of Danes, because the taxes for cars are one of the highest in Europe and sometimes can exceed the price of the car. 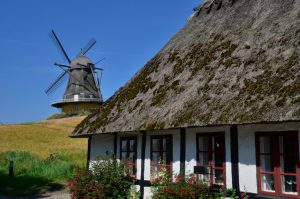 This is one of the biggest islands in Denmark. Fyn is connected with Jylland and Sjaelland by bridges. Population in Fyn is around 500 thousand people.  The majority of islands’ bigger cities are located on the coast. The biggest one, Odense (North of the island) is the third biggest city in Denmark. Other cities is Svendborg (South), Nyborg (East) and Middlefart (West). DEH Aps employees are also working in a smaller islands, which are connected with Fyn by bridges – Tasinge and Langeland.